Ground all flat. Demolition company did a good job. A few extra $ added to take away fence which practically was lying on ground and organise the plumbing capping. 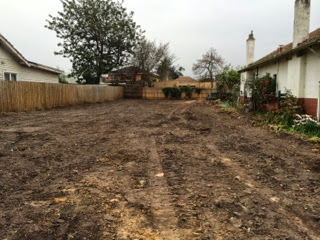 A few pointers
- if removing massive trees or stumps get big excavator to did a trench around stump so tree grinder can get most of stump out. 3rd visit and still we have stump in ground causing issues for fence guy. Dreading the pool dig & more roots.
- we still have some stray pipes in ground along boundary of property metal and terra cotta which weren't removed as not near house. Hmm who will get these out??? My guess me.... Neighbour smashed out some for fencing guy but only small section.
- crossover and footpath damaged by demo team but covered by their wishy washy small print clauses, our $2k bond with council not ours again unlil it's fixed, grrrrrrr. Asset protection guy was nice but has to do his job.
Moved water meter 600mm to the west to get it out of middle of driveway. Couldn't do further unless we applied to south east water to re tap into mains and move it. I think this was a good compromise that didn't cost thousands. I have a fitzroy box for driveway concreteter to install at house completion; this box covers the underground water junction valve before the 600mm offset bend.
Fence completed and Jim's fencing did a great job considering the massive tree stump which added at least another day to the job. We've only put up 29.3m of fence as the garage will be on fence line to that point; assuming council approves our garage position. 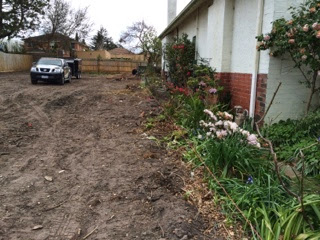 Still awaiting electrical pit. Told it will be in before oct 5.... Fingers crossed.
Post contract variations and confirmations from PD still waiting for. Tick tock.
Pool to be dug next week... Omg 7x4m pool looks big in my drawings in the dirt today.
Praying for October start date on house still. 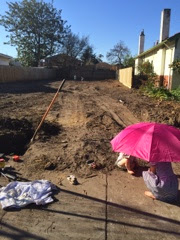 Big boys fighting with sticks in our future backyard & helping get the neighbours used to their noise.
Posted by Bindy at 10:01

Email ThisBlogThis!Share to TwitterShare to FacebookShare to Pinterest
Labels: Demolition