I'm a polite timid person, I don't skip queues and hassle people, I wait normally patiently, so building might not be my thing. But yesterday I learnt to keep calling and become ones own advocate. Finally the Demo company said they will come tomorrow as in today after a few daily phone calls asking when when when, previously they said a few weeks in polite emails.

Yippee the house should be gone in a week I thought last night. Good timing because beer bottles from "youth" (as per Neighbour) were starting to build up in the house which is barely standing.

Today I was talking to Neighbour warning him demo team might come this week. He tells me they already have house flat! What? Wow they started this AM. Soooo excited. Just went to see it and wow no messing around it's down. 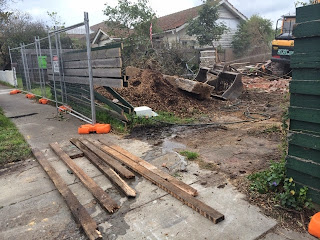 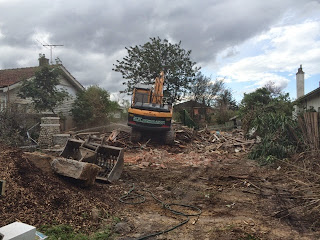 Noted demo team broken driveway. Sh#%. That means my $2k bond with council might be gone. Ouch. They've broken red bin (sure that will be a few $$) but saved green and yellow bin at least.

Fence with Neighbour collapsed needs replacing next week, more $$ but in budget. Neighbour can't afford to pay for it now but he's so lovely so I trust he'll pay us back over the next year as pension budget allows. I hope all our new neighbours as nice as him.

Our post contract variations we are still waiting on; guess I better start calling rather than patiently waiting there too. So this morning BC says council new laws house must be under 8m high, new roof pitch needed I guess. Also no confirmation on setback issue and garage position on fence line.

Called united energy and our electrical pit application sent in 8 weeks ago still not sent quote back. Phone got it moving should come this afternoon. Then wait another month for it to be dug, grrrr. 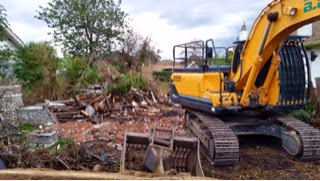