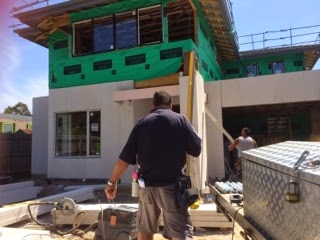 Private inspector doing his check. Lots of walls not finished perfectly yet, Bow's in walls, few missing noggins, they were replacing a failed truss and various other things not yet finished or not yet done to standard. Why oh why did supervisor want my lock up inspection done then if he wasn't ready?  Hopefully the framer and lockup carpenter will fix it all soon. Plaster delayed now till thrs next week and a good thing as too much to do before then.
Plumbers still have to come back and fix pipes.
Electrician still completing things.
Windows not yet finished in some areas.
Range hood and oven marked in wrong spot, lucky I knew my kitchen culture plans very precisely and noticed.
Recessed cabinets still not done.
Fan vents need installing.
Insulation was due to be done tue/wed. BUT last night Neighbour called to say at 930pm fri night in pitch black and bucketing rain there were people with torches in house and a trailer outside with stuff in it. Supervisor said no one meant to be there so I go to site and call police. I didn't feel safe to go in and see who was there as construction site theft common and I thought that's what was going on. Police were great, quick and didn't seem to mind it wasn't as burglars.  Better to be safe than sorry, rather than go into house unsure how many inside and what they're doing. Turns out it's insulation guys installing ahead of time. Supervisor really annoyed as not meant to come till next week. I got their details and I feel bad for them but they are going to be fired on Monday. He said this is not how PD operate and trades shouldn't be coming on site after 9pm and ahead of schedule. Unsure how this will effect fixes to frame and electrical and plumbing as most of installation installed. Love our neighborhood watch; nothing passes my Neighbour.
Walls still not flush 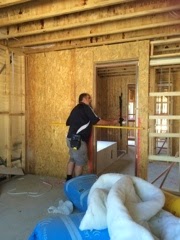 Door not yet secured and is bowed in middle. 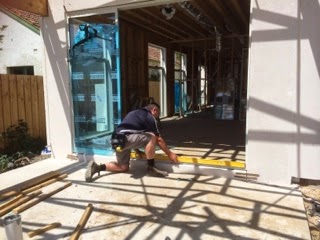 View from Alfresco into dining room