Porter Davis have started work again now after Xmas NYE break. During this break we sent a letter to them regarding slab concerns. A few bits from letter are:

The two main issues are:

There several slab edges and corners that are unacceptable.  They appear quite friable and out of square.  There appears either to have been a problem with the formwork and/or poor compaction.  Either way the workmanship is poor.  It appears that the formwork has been removed before the concrete has reached the required strength before removal (15MPa as per AS3600 Table 4.4).

In particular, I am concerned that later construction work may need to accommodate these defects, possibly leading to other issues or complications.

The hot water pad appears to be defective. It is a major concern that it is in such bad shape so soon after placement.  In particular, the edges and corners are friable and it is not square to the main slab.  There does not seem to be any expansion or isolation joints between the pad and the slab and there  appear to be some structural defects. I doubt this can be repaired without issues later.  It is not clear how it could possibly be fit for the purpose, nor how it is expected to last a reasonable timeframe.

Response so far was a pacifying phone call from a slab supervisor that neither dealt with our slab nor seen it in person. He assures me the concreter will rectify my concerns when he returns from holidays next week. Meanwhile the frame starts going up. I speak to frame supervisor onsite and ask him his opinion of slab edges and he gives me a realistic yet not reassuring opinion that it does need fixing before frame complete. The site supervisor calls me after I ask when concreter fixing slab and I want to know how it will be fixed not just when. He seems to think its no drama and frame can be wedged for now and next week concreter can fill in gaps if needed. Hmm, I called our independent inspector for help but he's away this week and returns next week and can review it then.

So for now I'm pacified briefly there's nothing I can do but next week I will start jumping up & down for solutions not just patch jobs.

In the mean time they've started our frame and in just 2 days they've done heaps and should be putting roof trusses on next Monday. Hebel planned for 3 weeks time. Amazing how fast this stage feels. 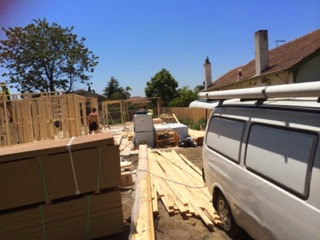 Email ThisBlogThis!Share to TwitterShare to FacebookShare to Pinterest
Labels: Slab